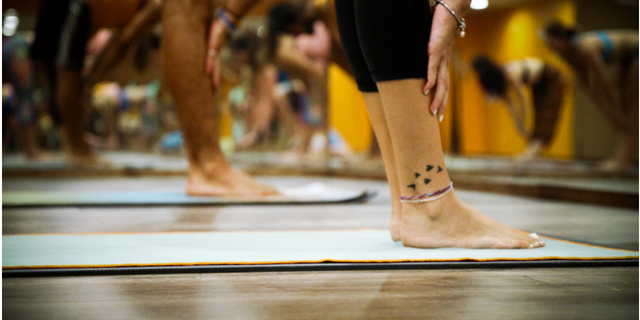 Goat yoga? Yep, it exists, as well as Beer Yoga, Rock and Roll Yoga, Yoga for Surfers, Goth Yoga and dozens of other variations. These days, the Yoga and fitness industry is doing its best to reach out to all walks of life. I have to admit that sometimes I can be a tad critical and immediately turn to cynicism when I hear of a Yoga style that sounds odd. Sometimes, we discover it’s our own selves that are odd and the other people out there are the ones who are movin’ and shakin’ and making a positive impact in the community.

Recently, while visiting my Mother, I attended a Holy Yoga class at her church. We met in the Fellowship Hall and the Yoga teacher softened the cafeteria-style interior by dimming the lights, adding lots of candles and even a disco light. (Does Disco Yoga exist?) She began the class with a prayer and a couple of verses on kindness from the Bible and then set an intention for the practise that linked to the verses. We moved through warm-ups and short standing sequence and then some floor work. We finished by resting in corpse pose, or Shavasana, and then she ended the class in prayer.

I admit, I was expecting a sermon, but instead I received a calming practise by a genuine teacher who wants to share the positive mental and physical aspects of Yoga with church-goers. Next time you hear of a new opportunity to try a different variation on Yoga or some other form of fitness, (pole dancing anyone?) have a go with an open heart and mind and you may just end up enjoying yourself. Trying new things is good for the body and mind and it keeps us young.

Have you tried a Yoga class that you first thought was off the wall but ended up being the best class ever! Leave a comment below and tell us all about it.