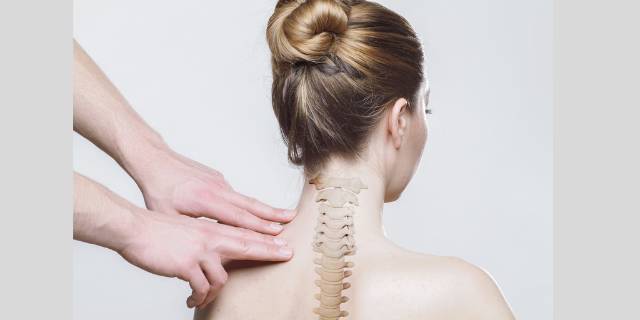 Welcome to the sixth and final instalment of my blog series based on the book I recently read, Your Spine, Your Yoga, by Bernie Clark.

Your Spine, Your Yoga is divided into five chapters: the axial body, the sacral complex, the lumbar, the thoracic and the cervical complex.

This post is dedicated to the chapter on the cervical complex. The cervical spine is made up of seven vertebrae and its primary function is to provide mobility, not stability. As I’ve mentioned in the previous blogs covering the series on the spine, the spine as a whole is to provide stability. The cervical spine is our exception as it gives us the greatest range of motion if comparing it to the thoracic, lumbar or sacral complex.

The cervical spine has a lordotic curve. It’s very easy to spot this curve when looking at someone’s profile. The average lordotic curve is 18 degrees but who is to say you’re average? Some people can have a curve up to 45 degrees and as little as 8 degrees which means the curve is no longer lordotic but actually curves forward.
Your unique lordotic curve could dictate how accessible some postures are to you. Yogis with a large lordotic curve may find Fish Pose (Matsyasana) a breeze, but when taking the head forward in a pose such as Rabbit Pose (Sarsangasana) can be a big challenge.

Let’s take Shoulder Stand Pose (Sarvangasana). As I’m hoping you’ve heard in your Yoga classes, you should never turn the head while in this pose. Better yet, your teacher has taught you how to use a blanket under the shoulders to create more space at the back of the neck. For some people, Shoulder Stand Pose can be painful because the spinous processes (the knobby bit you can feel when you touch the spine) of the vertebrae are long and there isn’t any flesh/meat there to cushion the student. This is an example of flexibility having nothing to do with the ability to do a Yoga pose.

The cervical complex is different according to gender as well as age. In general, women can extend the neck (take the head back) at a further degree than men and also have more rotation. Men however, generally have greater flexion (take the head forward) than women. As we age, we lose both flexion and extension but men lose a considerable amount of extension once they are in their 40s.

Last but not least, the Headstand (Sirsasana). Keep this little morsel in mind: The average head weighs approximately 5.5kg/12lb. This is less than 10% of a person’s whole body weight. Now imagine being upside down and your little neck/cervical spine which is meant for mobility is trying to stabilise the weight of 90% of your body! Yikes!

If you would like to hold a private, in person or online yoga session, please contact me so we can discuss your needs and I can design a Yoga plan uniquely for you.