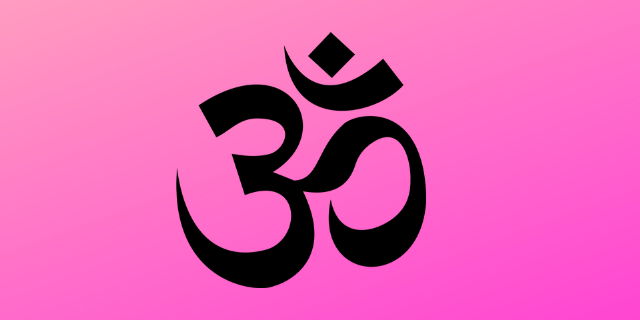 If you’ve been to a Yoga studio it’s highly likely you’ve heard the chant/mantra of Aum at the beginning and end of your class. Hands at the heart, eyes closed, the students often chant Aum three times at the beginning of class to calm the mind and focus intent. At the end of class, Aum is chanted at least once to seal or finish off the practice.

For some students, nerves immediately set in and they’re too embarrassed to sing along. There’s nothing wrong with sitting in silence and listening to the others if you’re one of these types. I didn’t start participating in the Aum mantra until I received my Yoga Teacher Training and I had to let go of the ego and chant the mantra in front of my students.

Aum is the sound of the universe. It is a vibration that can help you get settled if you feel anxious or when trying to enter a meditative state. It helps slow the breath and heart rate and once you’ve done five or six rounds of it, you can feel the vibration pulse through the body.

Aum is made up of three syllables. Often times people accidentally say a monosyllabic Om. When pronounced properly, the mouth will open in the first syllable ‘A’ is in ‘Ah’, it will round in the second syllable ‘U’ as in the long ‘O’ sound, and lips will close to vibrate the ‘M’ in the last syllable.

These days you can find the Sanskrit symbol of Aum everywhere; it’s on jewellery, clothing, Yoga gear, stickers, stationary and coffee mugs. Those who don’t know its meaning often equate it to India and/or the boho, hippie lifestyle. If those people only knew; Aum is everything, Aum is here and Aum is there….with or without that fun tie-dye t-shirt.